Face to Face
by Mette Sandbye 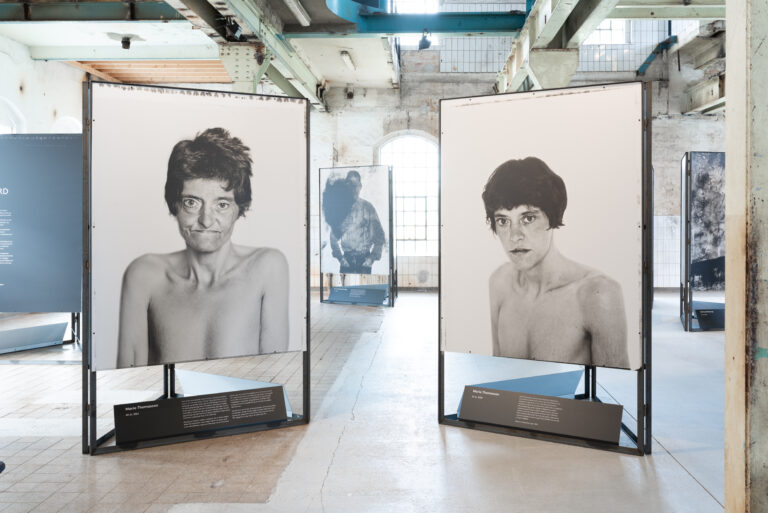 If there is anyone who has spoken of the value of meeting the Other – one’s fellow human being – face to face, it is the French Jewish philosopher Emmanuel Lévinas who developed his ethics-based philosophy on the basis of his own experiences in Nazi concentration camps during the Second World War. In his book Totality and Infinity,1 he calls the meeting with the Other “the ethical event of sociality”. When confronted with the face of the Other you become aware that you do not exist alone in this world, and so, ideally, you become disposed to hospitality. The face contains a demand to look after the Other.

‘Facebook’ is the name of the most widely used technological, social medium of our time. On the one hand, most of us experience something like a yearning for faces these days as we scroll through Facebook, Instagram and other social media to constantly see the faces of friends and strangers and try to identify with them. On the other hand, we might ask ourselves how often we actually look the other in the eye – on Facebook or in public spaces. In any case, we rarely do so when meeting the street paper seller in front of the local supermarket. Maybe we send them a brief and tentatively friendly look to signal that, in the very least, we acknowledge the other person’s existence. But we do not look her in the eye.

We must, however, when we meet the homeless in Helga Theilgaard’s large portraits, where, as we open this book, we simply cannot avoid looking them in the eye. It is my assertion that Theilgaard hereby creates an ethical event.

Lévinas argued that the direct meeting with the Other is a real-life event that the book – or perhaps the selfie on Instagram if that phenomenon had existed in Lévinas’ time – can never bring about. However, in Helga Theilgaard’s works we meet the Other through photography. Many have discussed how the basic function of photography as a medium, its ontology, is to preserve the past or “what has been” as Roland Barthes called it. Or that it satisfies our ’mummy complex’ as André Bazin described it; the wish to preserve something, to freeze a moment in death-like stillness. In this frozen stillness there is an element of nostalgia for the lost time, maybe even a longing for death. However, in our time, most likely influenced by the shareability of digital media, more people have realized that photography is also about establishing a sense of connection “here and now”, and that its most important function is its ability to create events and meetings between people. This is how Ariella Azoulay describes it, as well as Judith Butler who described the importance of looking the Other in the eye and acknowledging the “vulnerability” and hereby also the “grievability” of the Other as a human being, especially when it comes to war and situations of conflict.2 Even Susan Sontag, who wrote a series of critical essays in the 1970’s about how photography turns all life into frozen moments of beauty that only serve to create distance to the subject, reconsidered this in her last book where she, as the title says, described photography as a way of “regarding the pain of others”.

I experienced Helga Theilgaard’s large-scale photographs (each picture was one and a half metre in height and width) when she exhibited them outside on Kongens Nytorv in Copenhagen in the cold month of January in 2010. There in the stately and imposing square at the heart of Copenhagen, surrounded by the palaces of culture, capital and the bourgeoisie such as Magasin du Nord, Hotel d’Angleterre and the Royal Danish Theatre, it was not the Facebook-induced yearning for faces they appeased. Nor was it the awkwardness caused by the brief meeting with the street paper seller. Rather, it was an experience of sociality, of a direct meeting with another human being, as an ethical event just as the philosophers from Lévinas to Butler have described it.

This is the power of portrait photography when it is used with such tenderness, precision and ethical consideration as in the hands of Helga Theilgaard. This demand to look after the Other was met despite the photographs being exhibited in a busy urban space. The exhibition, which later that year was put up in different places around the country, facilitated great exposure and debate on the topic of homelessness in Denmark and received extensive coverage by the national media. The government at the time referenced the project during their negotiations of the Social Service Law, and the Welfare Museum in Svendborg subsequently acquired the works as part of their collection of documentation regarding poverty in Denmark. The current Minister of Social Affairs and Senior Citizens, Astrid Krag, has three of the works hanging in her office as a reminder of the people she works for every day.

In many ways, portrait photography has been the greatest success in the nearly 200-year-old history of photography. Sure, the magic of experiencing empty city- and landscapes or still lifes of arranged objects in the very first photographs taken with minutes-long exposure time was magnificent. But it was only when living people were placed in front of the camera that photography truly gained its allure and explosive popularity which was unlike that of any other new technological invention before it. But during the 20th century – due to different and sometimes inscrutable reasons – portrait photography has been somewhat frowned upon and unpopular among ‘real artists’. This is probably due to its association with a widespread desire to have one’s portrait taken, which took off with the carte de visite photography all the way back in the 1860’s and which continued into the 20th century in such popular manifestations as school photography and the local wedding photographer. And at the same time, it has been associated with a strong sense of staging and has been used by those in power to present themselves in a favourable or powerful light.

There are, however, noticeable exceptions from this distaste for the format throughout the 20th century: Take for example Jacob A. Riis’ on-site portraits of poor immigrants in the migrant neighbourhoods of New York around the year 1900, or August Sander’s immensely charismatic and simultaneously typological portraits of German citizens in the first decade of the century; anything from locksmiths, bakers and boxer to business magnates, whom he gathered in his 1929 book Antlitz der Zeit. Menschen des 20. Jahrhunderts. Or Richard Avedon’s awareness-raising portraits of cowboys, coal miners, vagrants and barmaids In the American West as was the title of his book from 1985. Like Avedon’s portraits, Theilgaard’s homeless – and rootless – Danes stand facing the camera in front of a white background and are usually portrayed from the waist up. They are staged, and this is exactly why the effect is so powerful. The meeting with the homeless in urban spaces has been transformed into a more intimate and, to some extent, more intense meeting in book form. Here we meet them head-on, face to face. They look directly at me with a request to be seen and recognised as a fellow human being.

We say that a photograph says more than a thousand words, and once there was the maxim among photographers that the photograph ought to speak for itself – without any words; an absurd thought. Here in this book, we get a short text describing each of the portrayed men and women, which enhances the meeting with them as real people with real stories about life, families, love and careers that could have been yours or mine. Stories about adversity and unfortunate, often incidental, circumstances, but also – in some cases – about the way out of homelessness and creating a good life. It is also a story of time, because it has been more than ten years since Helga Theilgaard took the first portraits. The eyes and especially the hands, hair and bodies with scars, tattoos and other markings tell of the passing of time for better or worse. Many have evidently aged in an all too drastic way that is a testimony to their tough everyday life, while others appear as strong and vigorous as they did thirteen years ago and some even more so.

This is a story of what homelessness does to people. It is also a story that exposes the incidental nature of life. It is a story of survival. And it is the story about the mortality that we all share. Photography is a medium that both establishes meetings, presence and an ethical demand, and which freezes the past like a memento mori. Helga Theilgaard’s portraits unite all of these qualities. Face to face.

1 Lévinas’ work Totalité et Infini is originally from 1961 and was published in English in 1969 with the title Totality and Infinity.

2 See fx Ariella Azoulay: Civil Imagination. A Political Ontology of Photography (2012) and Judith Butler: Precarious Life: The Powers of Mourning and Violence (2004) and Frames of War. When Is Life Grievable? (2010).